To share your memory on the wall of Susan Barrett, sign in using one of the following options:

Susan Barrett (nee Fitzpatrick), age 91, passed away during the early morning hours of June 16, 2020 at Pine Grove Nursing Home. She was born April 16, 1929 on the family farm in a breathtakingly beautiful valley ... Read More
Beloved Wife and Mother

Susan Barrett (nee Fitzpatrick), age 91, passed away during the early morning hours of June 16, 2020 at Pine Grove Nursing Home. She was born April 16, 1929 on the family farm in a breathtakingly beautiful valley outside the village of Cootehill, County Cavan, Ireland.

She is survived by her husband of over 60 years, Anthony Barrett, and her four sons to whom she was devoted – Dermott, Andrew (Susan), John (Kimberley) and Brendan (Tomoko). She is also survived by her nine grandchildren which became the focus of her later years – Conor, Kevin, Matthew, Maura, Colin, Jack, Hillary, Jacob and Ken.

She was born into a large family, with 9 brothers and sisters to parents Patrick and Mary Ann. Sadly, only her sister and confidante Bridget (Bridie) Barek, remains with us.

She was a smart woman, quick to laugh, and a voracious reader. She drank endless cups of tea and was not above smoking the occasional cigarette – even though she had given them up for good many years before. She also had the patience of Job which came in handy raising four energetic, and to be honest, often wild boys.

A good student, she travelled to England with her sister to study nursing. On one of her proudest days, she was certified as a registered nurse by the General Nursing Council for England and Wales on December 2, 1957. Nursing, and the caring for others, became her calling, which she practiced, off and on, for 30 years.

Seeking opportunity and a chance to join her brother Cornelius, she travelled to Canada in 1958. She sailed from Southhampton to New York aboard the Queen Elizabeth liner. She crossed into Canada at Niagara Falls on April 16, 1958 with $200 in her possession according to her immigration form.

She worked as a nurse at St. Joseph’s Hospital in Toronto, living with her sister Bridie in the Sunnyside neighbourhood of Toronto.

She met her future husband, Anthony, at a St. Patrick's Day dance. They were married in 1959. They settled down to raise a family together in the Toronto area.

In her later years, she battled Parkinson’s disease but faced it with her usual equanimity.
She lived a long and full life – and although slight of body she had the heart of a lion. She will be missed every day.

A celebration of Susan’s life will be held at Ward Funeral Home, 4671 Highway 7, Vaughan, Ontario on Friday June 19th, 2020. She will be buried at Holy Cross Cemetery.

Flowers or donations to Parkinson Canada are welcome. Online condolences may be expressed through the Ward Funeral Home Website.

To live stream the service from the comfort of your own home a Zoom link has been created. The Service will begin at 1:30pm. Please click on the photos/videos tab above to connect to the webcast.
Read Less

Receive notifications about information and event scheduling for Susan

We encourage you to share your most beloved memories of Susan here, so that the family and other loved ones can always see it. You can upload cherished photographs, or share your favorite stories, and can even comment on those shared by others.

Posted Jun 29, 2020 at 08:57am
Sincerest condolences to the Barrett family on the passing of your mom. May the many wonderful memories you shared bring you peace and joy during this most difficult time!
Thoughts and prayers are with you!
Donald MacGillivray
(friend of Andrew's from Henry Carr)
Comment Share
Share via:
EH

Posted Jun 22, 2020 at 03:03pm
We just loved Aunt Susan. When I would think of her, I would always think of her warm, adorable smile and eyes that sparkled with laughter. As a kid, I remember my mom always saying how much she adored Aunt Susan, and "isn't she just lovely?" Indeed, she was. I'm so thankful I was able to bring my mom to visit with her and Uncle Anthony a couple of years ago in Toronto. Wish we had hugged her even tighter. All our love, Erin, Aunt Evelyn, and Uncle Jim.
Comment Share
Share via:
EH

Posted Jun 20, 2020 at 12:47pm
We were very sad to hear of the passing of Susan. Our deepest condolences to Uncle Tony and to all the family from the Barretts in Newcastle Enfield Co. Meath Ireland
Comment Share
Share via:
JD

Posted Jun 19, 2020 at 04:19pm
Today was spent reflecting on such a sweet and wonderful woman. Such a loss for the entire Barrett family. Lots of love during this time.

Posted Jun 19, 2020 at 12:19pm
Rest in peace Susan. You were so kind and happy to welcome me into your home and make me feel part of your family all those years ago when I was in Canada - I could never forget your gentle giving nature. My sincere condolences to Uncle Anthony and all the boys. Ar dheis De go raibh a hanam. 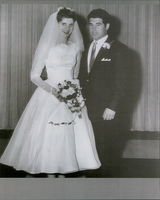