To share your memory on the wall of Pierina Mattiassi, sign in using one of the following options:

Print
Pierina Mattiassi, nee Pierina Fornasari, was born on Sunday July 30, 1922 in the small town of Bottenico di Moimmaco, in Udine, Italy, to Ermenegilda Pizzi and Girolamo Fornasari. She was second eldest of her three siblings, Elsa, Domenico (Meni), a... Read More
Pierina Mattiassi, nee Pierina Fornasari, was born on Sunday July 30, 1922 in the small town of Bottenico di Moimmaco, in Udine, Italy, to Ermenegilda Pizzi and Girolamo Fornasari. She was second eldest of her three siblings, Elsa, Domenico (Meni), and Delia. She was closest with Delia and they were practically attached at the hip. They often secretly went out dancing wearing lipstick, which was not considered lady-like by the times. Along with her siblings, Pierina contributed to the family farm tending the cows, pigs and chicken and working in the vineyard and fields.
Always the social butterfly, Pierina made many friends amongst her neighbours, including her future husband Carlo Mattiassi (born 1918). Pierina and Carlo’s childhood homes directly neighboured one another, and they had been friends since early childhood. On January 26, 1952 Carlo and Pierina were married. A few months later, Carlo went to Canada to begin working and setting up a life for them in Toronto. Later, in December 1952, they were blessed with their first child, a beautiful baby girl, Paula Mattiassi. In 1953, Pierina and Paula travelled on the Vulcania and arrived in Halifax in September. From there they made their way to Toronto where they lived with Carlo, in a small flat on Lappin Ave. They moved once more, but eventually bought a home and settled at 85 Lappin Ave. At this house they had quite a few boarders. On any given day you could find Pierina in the kitchen cooking up a storm to feed her family and all the boarders who became an extension of her family. In 1961, Carlo and Pierina were blessed yet again, with a dashing baby boy, Robert Mattiassi. A few years later in 1967, she began working on the line in the chocolate department of Willards, later bought by Neilson’s. Here Pierina made many friends, contributed her ideas and took part in all the group activities. In the 24 years that Pierina worked there, she ate at least one chocolate bar a day, which no doubt contributed to her longevity!
In 1964, she and Carlo, bought a house in Cividale del Friuli, Italy, which was just a few kilometers from their hometown. She stayed close with her siblings and friends in Italy and called them all the time. Many a summer, Carlo and Pierina would travel back to Italy and visit their childhood friends and family. Carlo and Pierina enjoyed travel. They would often take trips, some of their favourite including Cuba, Mexico and DisneyLand. Pierina loved the beach and could spend hours basking in the sun and in the water, leaving her with a beautiful golden tan. In 1973, the family moved to 1605 Glen Rutley, in Mississauga, where she would stay for the rest of her life.
In 1978, she became a nonna, with the birth of her first grandchild, Adrian Toffoli, son of Paula and Alex. Always a nurturer and fond of children, she was ecstatic for this new role. At the house in Mississauga, Carlo and Pierina often spent time outside working together to cultivate their huge vegetable and flower garden. Sadly, in 1988, after 36 years of marriage, Carlo passed away. Pierina often liked to reminisce about their time together, had many photos of him in the house and continued to tend their garden. In 1996 Pierina became a nonna once again, to a lovely baby girl, Sabrina Mattiassi, daughter of Robert and Shirley. Pierina found her second wind as a grandmother and was active in both her grandchildren’s lives, attending their school functions, playing with them, travelling with them, babysitting and looking after them, and always showering them with love (and food!). Throughout her life she was on the go. She enjoyed knitting, going to her local Italian bingo clubs, working in her large garden, travelling, and cooking Italian and Friulano classics worthy of a Michelin Star. She was many things in her 98 years on earth, a mom, a nonna, a sister, a wife, and a friend. She was a vivacious Friulana determined to live her life to the fullest, which she most certainly did on her terms.
Read Less

Receive notifications about information and event scheduling for Pierina

We encourage you to share your most beloved memories of Pierina here, so that the family and other loved ones can always see it. You can upload cherished photographs, or share your favorite stories, and can even comment on those shared by others.

Posted Nov 09, 2020 at 09:18am
Dear Paula and Robert, Your Mother was a very special person and I remember her clearly even though it was only a few times Rudi and I were at your home in Mississauga. She was cheerful and bubbly, and yes there was always good food! Even though I will not be present at the service, my thoughts are with you. My condolences, Edith Vezer
Comment Share
Share via:
GC 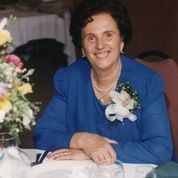