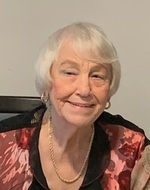 Rich and varied locales form the path which Judith Mary Reigel (nee Hannam) followed in her journey of life. That journey found its final earthly rest early on November 14th at the Bethell Hospice in Inglewood Ontario in the presence of her husband of some 58 years, Vic, and daughter Sonia.

Born in Yorkshire England and spending her early formative years with three brothers, Tony (Kath), Rod (Carol), and David (Susan), in the 7th Century market town of Otley Yorkshire, which she described as a wonderful childhood with loving and gifted parents, John and Kath Hannam.

Reaching adulthood, Judith sailed on the Queen Elizabeth to Manhattan USA, and was promptly hired to serve in the field operations section of the United Nations Secretariat. Initially staying with and always connected to her aunt and uncle, Doreen and Walter (Hindle). The key moment in her journey came when she met and began an instant and mutual love affair with a young Episcopalian (Anglican) priest. Becoming a clergy spouse, while very much her own person, she journeyed with Vic through the turmoil of Jersey City through the 60’s, Vic as archdeacon, then crossing the mid wintery Manitoba border and now a mother, first of David (Sandra), then Sonia (Ron), and finally Andrew. Vic, now with an urban planning degree, served an experimental term as planning officer of the diocese of Winnipeg. New innovative ministries in Flemington Park and Malvern and parish work in Parkdale and Brampton followed, during which she began to apply her vast array of skills to community needs outside the home. Serving as a head secretary in elementary schools for 24 years, here combining her many skills with her great warmth and love of children, she also generously volunteered over this time in hospitals, social agencies, many church activities and other groups, and as president of her Probus Club. She formed a wide circle of friends and entertained often.

Her extended English family and lifelong friends were visited often and made a wonderful and lasting impression on her family. Judith always embraced any opportunity to enjoy her role as Aunt and great Aunt to her much loved nephews and nieces.

Another generation emerged in the family. Benjamin and Harrison Reigel (David), Daze, Jonathan and Thomas Francis (Sonia), Ashleigh and Connor Reigel (Andrew), all were cherished deep in her heart.

Retirement opened the opportunity to explore the people and places of the world: Europe, especially Vienna (thrice), as well as Argentina, and Hilton Head and the west of North America.

After a decade, a diagnosis of advanced Cancer brought in ten years of extensive treatment (with gratitude to Dr. Osborn and the team at Sunnybrook) and constant struggles with pain. In spite of this, she lived these final years with the same bountiful compassion, cherished family and friendships, resourcefulness and courage as in earlier phases of the journey. A small private family service will be held on Friday November 20 at 11:00 a.m. followed by cremation and committal at Meadowvale Cemetery. There will be an opportunity to view the service from the comfort of your home via livestream on Judith's page on the Ward Funeral Home Book of Memories at www.wardfuneralhome.com. A celebration of life will be held at a later and safer date.

This obituary is protected by copyright by Brampton Chapel. Proudly Serving the Community of Brampton. Brampton Chapel is located in the province of Ontario, Canada.

All rights reserved. This obituary is also archived at obittree.com