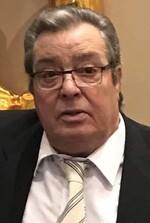 Leaving behind his brother Carlo & Giuseppe and re-uniting with his late brother Vito.


His hobbies and passion are gardening, playing cards, hunting and most importantly spending time with his family and friends.

In lieu of flowers, donations to the Canadian Cancer Society would be greatly appreciated.