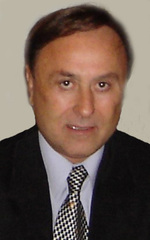 Dominic Flagiello, the legend that was said “he is so good at selling, he could sell ice to Eskimo’s” has peacefully passed away at the age of 72 on September 21, 2020, with his Son’s and favorite Daughter-In-Law at his side.

Dominic was born in Vallelonga, Italy, and immigrated to Canada when he was young, and got himself involved with many things over his lifetime; Musician, had a Karate School, Worked for Nortel, had a Pinball Repair School, Vending Operator, owned a Arcade, got involved with Coin-Operated Amusement Machines Manufacturing-Sales-Service, and the man who brought the Vision Counterfeit Detector to a Retailer near you.

Dominic’s character and personality was one you could not resist, and he knew how to work a room. No matter the situation, or no matter how mad you were at him, his charm would win you over.

Dominic will be survived by his 3 Sons Mario and Wife Maria, Anthony, and David, along with his 3 Grandchildren Domenico, Samantha, and Ethan.

In lieu of flowers, the family requests that donations be made to camh.ca in memory of Dominic Flagiello