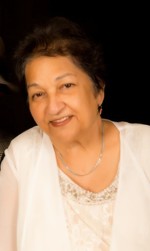 It is with a heavy heart that we confirm the passing of Ceceline Millicent Gajardar. In the early morning of Thursday September 17th, 2020 with her children at her side, she gently slipped away from us to join the Lord, our God in His house. We know she has earned her "wings".

She married her first and only love Beresford N. Gajardar, lovingly known as Sonny.

After having her first two children in Jamaica; Barbara and Bernadine, they later adopted Sonny's youngest sister Beverley as their own. The family migrated to Toronto, Canada in 1967 seeking a better life for their children. They had two more children in Toronto; Belinda and Bridget and were united with their son Basil.

Ceceline was a devoted wife, mother and the family’s matriarch. She was a kind, gentle and loving person that made time for all her loved ones including family members and friends. She created many memories with her family showing them how to love, have fun and taught them to be compassionate to others through her own actions. She was in the hearts of many as a mother, mentor, guide and confidant.

An immeasurable hole is left in our hearts as we grieve our loss, but her memories will live on because she will be fondly remembered forever.

Mom, we will miss you and may you rest in peace.